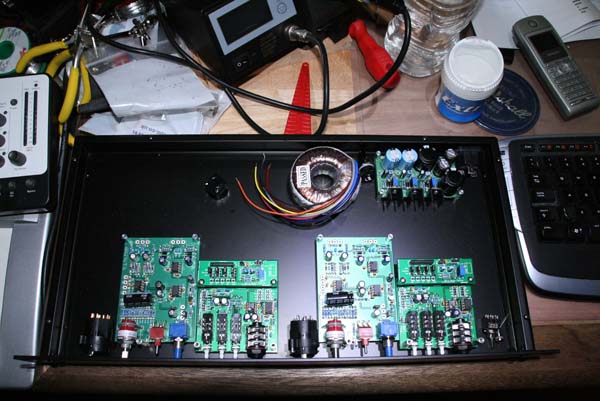 It’s been a little while since the last update, things have been busy round here which has meant a little bit of a delay in the build. I finished off the build of the rest of the boards at the weekend: 2 VU module boards, one DI board and one SC-1 preamp board. The VU board was quite quick due to the low number of components, so it was about a 30 minute build. Being a little bit more familiar with the kits now, the build time on the boards for the second time round were about 25% quicker. I asked Owel (of Five Fish Studios) about the ceramic capacitor I broke, turns out I can use just about any ceramic capacitor as they were only for buffering power, no audio running through those particular components… managed to get a bag of 10 for a quid on eBay… problem solved!

I spent some time deciding upon the layout of the boards inside the 1U rackmount case. I had intended to mount the VU meter above the DI board using hex threaded spacers, but with the stand-offs from the base of the case it makes the assembly too tall to fit the 1U height. In the pictures you can see where I am toying with the idea of mounting the VU boards on the back of the preamp boards and running hookup wire to the LEDs on the front panel (which I’ll be mounting with LED clip lenses anyway). The alternative is to try out the former arrangement and check out the resultant height when used with some nylon spacers threaded over long M3 bolts instead of the hex spacers. I shall try it out this week.

The next job is to start on the front panel design… once that’s finalized I can start on drilling the case holes!

Here are the pictures: 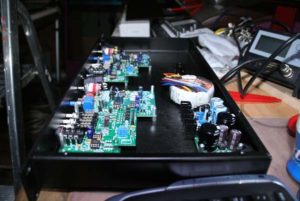 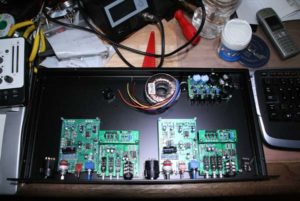