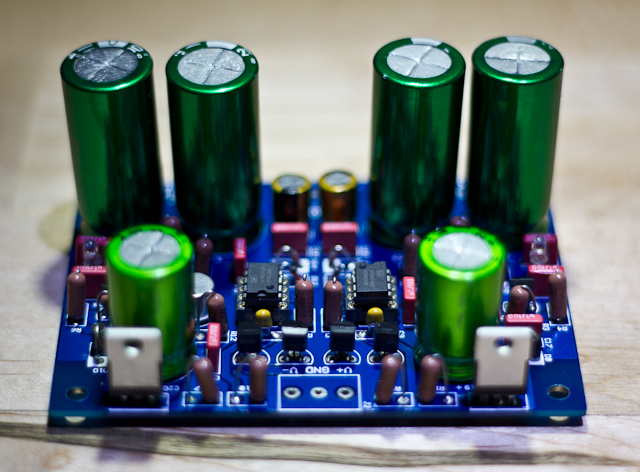 Quick update: I’ve now finished assembling the unit. Several hours with a CorelDraw template, a centre punch and a variety of drill bits in my pillar drill resulted in a case with all the holes prepared. The wrinkly appearance of the front panel is purely down to the protective film that’s still stuck on until the unit is finished:

Next was a test fit of all the components to ensure the drilling was accurate or if any adjustments need to be made. The volume knob is a temporary one until the big aluminium knob arrives from Hong Kong! After a full day, most of the interconnect wiring is done.

Yesterday, I completed the wiring and fired it up for the first test. It didn’t go well… or at least I’m fairly sure that’s what the burning smell and smoke indicated!!

After some inspection, I’m fairly sure it’s just a rubbish regulator board. I struggled to find adequate documentation for the board and so I’ve ordered a different one which should be here in a couple of days.

In the meantime, I hooked up my bench PSU and tested the rest. Turns out I had the LEDs of the output channels in the wrong order, so that when I selected channel 1, channel 4 lit up… a little swapping of lines in the DIL header plug sorted that one. Further testing was good, the IR remote control correctly turns the volume knob and selects input channels as expected, though I do seem to have a “sticky” input channel 4 switch/LED.

A nice pair of OMEG dual gang pots arrived this morning which will be volume controls for the feed to a sub-woofer (for “pleasure listening” as opposed to mixing) and the cue feed to the headphone amps.

One addition I’ll need to make is to put a heatsink on the voltage regulator onboard the attenuator board. It wouldn’t normally need one, but for the fact I’m running a 12V supply within the unit and hadn’t realised the voltage reg is an LM7805, meaning it’s reducing a 12V supply to 5V… hence the amount of heat it’s generating. Again, the almost non-existent documentation with the Chinese kit didn’t include any such caution.